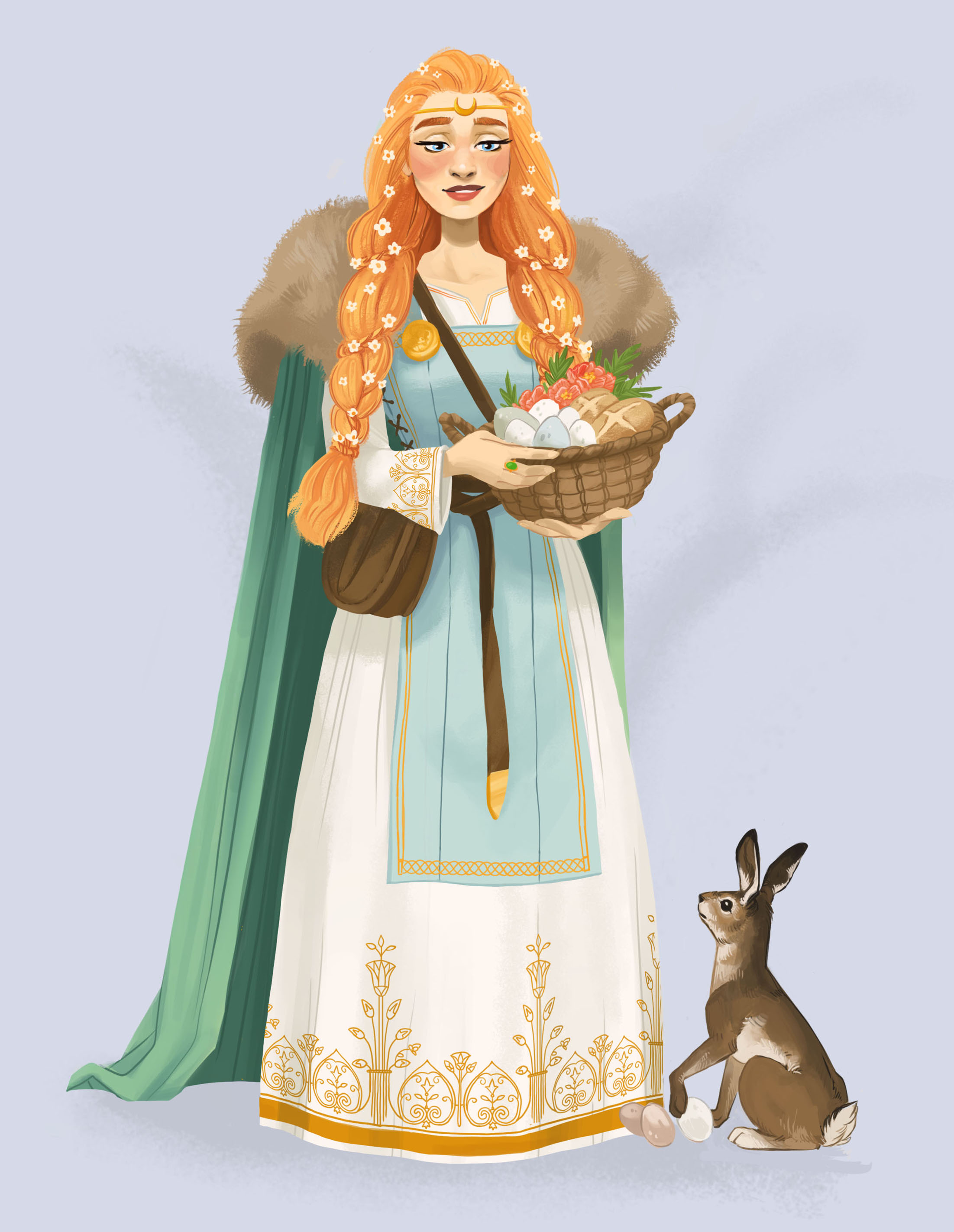 Ostara falls on the spring or vernal equinox. In nature it is a time of rebirth, when nature finally comes alive after the long winter; the air is warming and the snows have now finally gone. The first flowers are beginning to bloom, the birds are nesting in the hedgerows, and many animals are finally coming out of hibernation and looking for mates.

A traditional charm sung by children at this time, during these egg games was:

Bless the Egg by light of Moon,
Place the Egg on silver spoon,
Turn the spoon three times round,
Wealth to you and good crop ground.

For the early agricultural Neolithic peoples of Europe the spring equinox was one of the most important astronomical events of the year. It marked when the rivers were starting to flood with the spring tides, when life giving silt was driven up into the flood plains. This was an important event for an early agricultural peoples, it allowed them to plant in the rich fertile deposits laid down by the river. Spring equinox alignments are some of the most common amongst the ancient sites of the world. In County Meath, Ireland, the sun rises at the equinox to pierce the chamber of Cairn ’T’ on Lough Crew, hitting the decorated stone calendar on its rear wall, the Sphinx in Egypt faces the rising sun on equinox morning, Angkor Wat Temple in Cambodia is aligned to anticipate the rising sun three days before the Vernal equinox, in Guatemala the sun rises up the steps of The Temple of the Jaguar at Tikal until its shadow is cast over the neighboring Temple of the Moon.

The celebration of spring equinox is of course, the celebration of the return of the spring. While today it is known as Easter in common culture, and calculated to be the Sunday falling on the full-moon after the equinox, it once fell on the pagan festival of the equinox from which it actually originated. The Christian symbolism of Christ’s resurrection resonated well with the pagans they sought to convert, for they celebrated the rebirth of the Goddess of Spring, Ostara or Eostre at this time. Little is known about this Anglo-Saxon/Germanic goddess of eggs, fertility and renewal, except for the one surviving custom which survived Christianity; the giving of eggs at Easter.

While today these are fancy chocolate ones, they were once real eggs signifying rebirth, fecundity and fertility which were given on the eve of the spring equinox. The original Easter Bunny in Anglo-Saxon Britain was in fact the Hare. There was the misconception among the common folk that Hares laid eggs! People, who disturbed a Hare, would often find a nest full of Lapwing eggs close to the Hares scrape, and it became a common belief that it was the Hare that laid them. The explanation for this strange behavior was produced in the folk tale of the Goddess and the Hare. In the story the Goddess Ostara finds a wounded bird in the snow; her wings were frozen and she was unable to fly. To allow her to survive the winter months she transformed her into a Snow Hare, making her now fast enough to evade the seasonal hunters. In the spring the Hare laid a clutch of eggs showing that it was still a bird at heart. This misbelief carried on until quite late in English culture and did not disappear fully until the 16th Century. It is possible that Ostara had lunar associations, the full-moon tides triggering the inundation of the rivers. The Hare was Ostara’s most sacred creature, which is why today we look at the full-moon and see the shape of the little Hare, watching over the green earth for his loving mistress. Various customs existed in England related to eggs at this time, many now forgotten. In parts of England the mummers, who first appear at Yule would now return with the Pace Egg Play; a performance with many of the same characters as their Yule play, but also including a character known as Tosspot, who held a basket to collect eggs. Often known as Pace-Eggers or Jolly-Boys, they would blacken their faces and travel from house to house performing their play. They would be rewarded with gifts of eggs wrapped with various roots, leaves and flowers. Other customs included rolling or ‘trundling’ Easter Eggs down hills, or using them in games of catch.