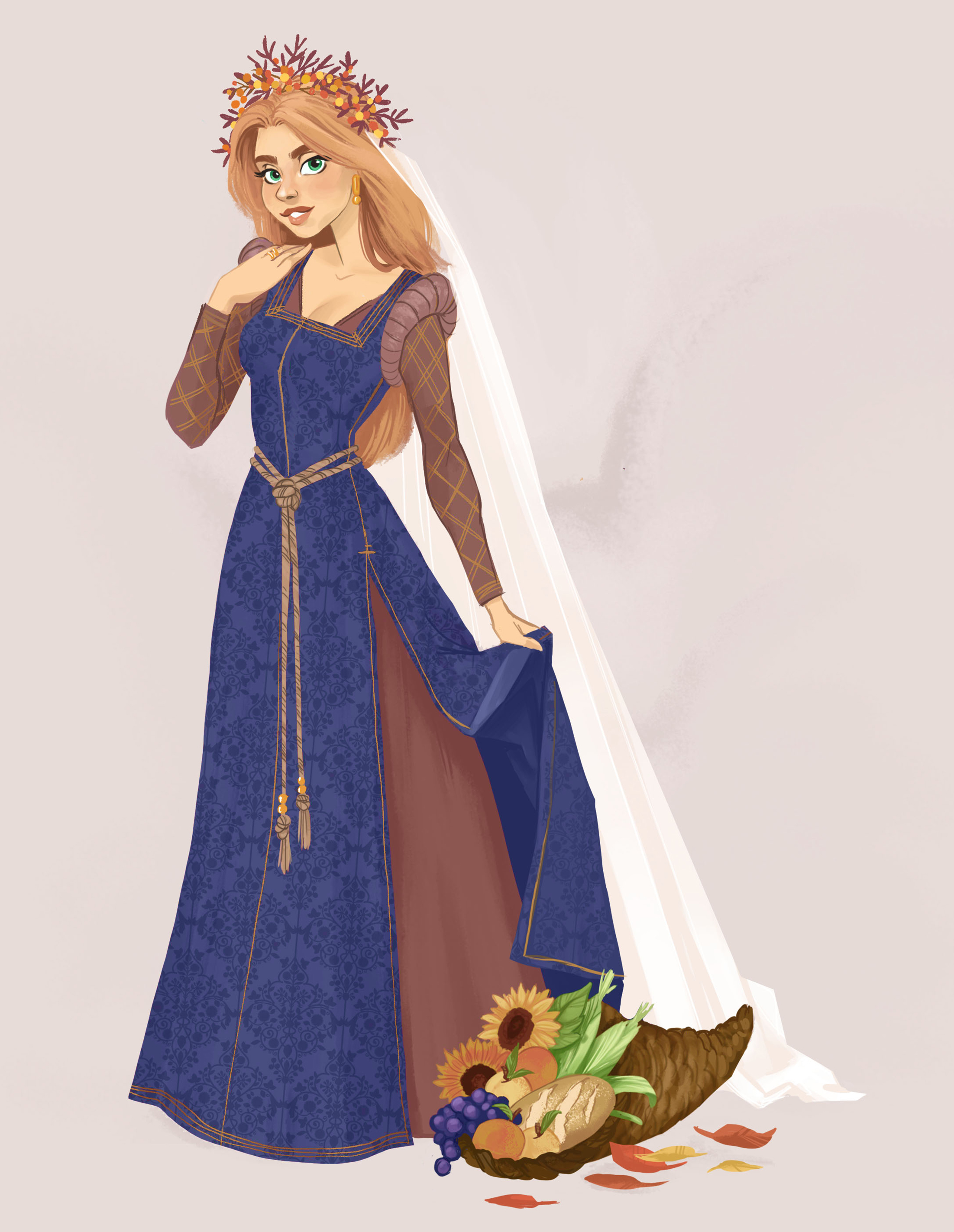 This is the second of the great harvest festivals, and probably the oldest. It is traditionally titled Mabon after the Welsh god Mabon ap Madron, although the use of this title is really quite recent. Astronomically this is the time when, like Spring Equinox the days and nights are equal in length, but the days will from now be shorter than those of the night. It was perhaps for this reason Christianity adopted this festival into their calendar year as Michaelmass; the Feast of St.Michael, as it marked the triumph of the Archangel Michael over the bright and shining, and clearly solar, Lucifer. His demise is clearly symbolic of the weakening of the sun’s power at this time as it rises lower in the sky every day. Its power will continue to wane until the days begin to lengthen again after the Winter Solstice – the festival which marks the return of the Oak King in English folklore. In some parts of Europe farmers are still bringing in the grain harvest at this time, but it marks a harvest of far older origin.

Yellow the bracken, golden the sheaves,
Rosy the apples, crimson the leaves,
Mist on the hillside, clouds grey and white,
Autumn, good morning, and summer, goodnight!

Autumn is finally here; the temperature is dropping; there is mist on the hillsides, and fall is here; the leaves are turning red and gold and falling from the trees. The bushes and the hedgerows are abundant with berries, fruit and nuts. The animals are preparing for winter, and, in ancient times, hunter gatherers would take this opportunity, as does the squirrel, to store away Mother Nature’s bounty for the coming winter. Like the Spring Equinox this date was important enough for ancient man to mark it by aligning monuments, such as tombs with the setting and rising sun on this date. The Neolithic passage tomb of Knowth in the Boyne Valley, Ireland is one such site where the two passages in the tomb align with the Autumn Equinox at both sunrise and sunset. In the old Celtic Tree Calendar Autumn Equinox fell between the months of Vine and Ivy, both plants which grow spirally. Many of the ancient sites in Celtic countries with Equinox alignments, such as Knowth and Lough Crew in Ireland, have spiral symbols carved on to their stones. The lore of the spiral; a symbol of initiation reincarnation, and rebirth, clearly has origins in a far older people than the Celts. This could explain why the importance of Autumn Equinox is recognized by so many cultures around the world.

In Korea, the festival of Chuseok or Hangwei is celebrated at this time. It is a three day festival celebrating the harvest where people return to their ancestral homes to celebrate with a feast. In Latvia, it is celebrated as Mikeli; it is a time when it is believed the last of the harvests should be in as the gates of winter ‘open’. In Europe, the Autumn Equinox also traditionally marked the beginning of the Hunting Season; when the emphasis went from the Goddess of Agriculture, to the God of the Hunt. In Abbotts Bromley, Staffordshire, England, this time is marked with the Horn Dance, an annual celebration which can be dated back to when hunting rights were granted to two families in the village by King Henry III in 1226. It is, of course, far older having origins going back hundreds of years before this in Anglo-Saxon sympathetic folk magic. Every year they mark this date by dancing around the village with six sets of horns; three white and three black, which clearly symbolize the balance between night and day. They are accompanied by a hobby horse, the fool, and more importantly a young boy dressed as an archer, and a man dressed as ‘Maid Marion’; the latter two characters being possible memories of the god and goddess of this ancient festival. It is said that at this time Gwyn ap Nudd, the horned god of the ancient Britons and leader of the wild hunt first stirs awake beneath Glastonbury Tor. As lord of death, this stirring starts the process which leads to winter, as the Summer finally gives way to Autumn. He will finally bursts forth at Samhain with the Wild Hunt in pursuit behind him, bringing on the power of Winter: